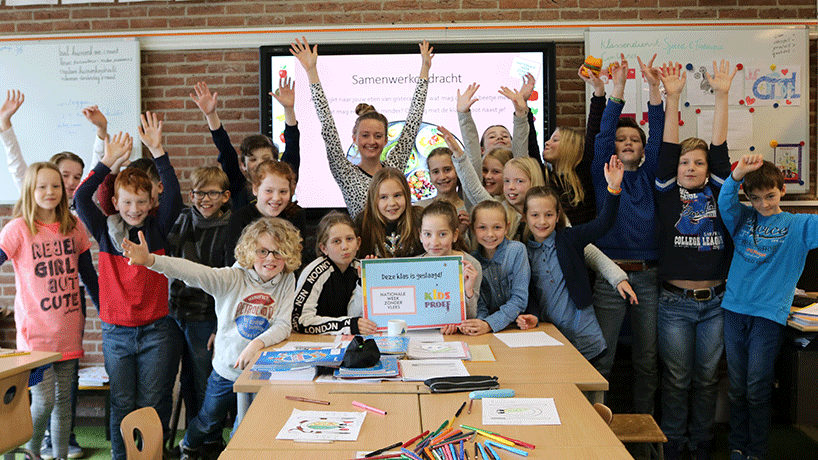 At primary school “De Blaak” in Tilburg, three KidsProef classes were planned for the students of year 7 and 8. Little did they know that the classes were thaught by a very special guest teacher. Initiator of the Week Zonder Vlees, Isabel Boerdam, was there herself to teach the KidsProef classes for the National Meat-Free Week together with KidsProef.

Successful KidsProef Classes
During the interactive classes on sustainable and healthy nutrition with care for people, animals and the environment, children get answers to the questions; “What is food?”, “What impact does eating meat have on the environment and your health and what is actually ‘fake’ meat?”. Susanne de Kleijn is KidsProef ambassador and thaught some KidsProef classes last week: “In the National Meat-Free Week, it is extra important to pay attention to education on this topic for children. After all, kids are the future. Because of the Youth-newscast (Jeugdjournaal), most children are already aware of the “National Meat-Free Week”-initiative, but this also rises many questions; because what do you have to eat instead of meat? During the classes we got to answer all these questions.”

Colour your Dinner & Peanut Butter Munching
Isabel opened the classes by asking the students to to colour their dinner from the day before in three different categories: meat-fish, fruit-vegetables and pasta-rice-potatoes. Isabel: “What do you notice and perhaps you should have eaten more or less?” In the remainder of the classes it became clear what these categories are and why they are good for your body. Of course, attention is also paid to the eating of no or less meat. For example, Isabel explained you that you can shower at least 46 times with the amount of water the production of 1 beefburger costs, while that for a soy burger is only 3 times. She also explained that legumes are high in protein and therefore a nice alternative, especially in the National Meat-Free Week. To help the kids along, De Smaakspecialist, treated the students to some BioToday peanut butter squeze packs as a nutritious protein-packed snack.

Isabel is very pleased with the KidsProef classes during the National Meat-Free Week: “If we can raise children with the idea that vegetarian or plantbased meat substitutes are just as normal as normal meat itself, then we can bring about a change in the world for the long run. I enjoyed hearing that children are open to new products and are actually less restrained than most parents are themselves. So parents: take  note from your kids!”

About KidsProef
De Smaakspecialist has the ambition to share as much knowledge on sustainable nutrition as possible with the world, including children. We believe that honest and transparent education on food, sustainability and nutrition simply can not start early enough. This is why about 1.5 years ago, the educational elementary school program, KidsProef, was brought to life. KidsProef is a free educational program for primary school children of year 7 and 8. During the interactive classes on sustainable and healthy nutrition with care for people, animals and the environment, children learn about the origin of food, the nutritional elements in food, what the term ‘organic’ means, what exactly sugar is and what is does to your body, and plenty more!

More information about KidsProef can be found here.